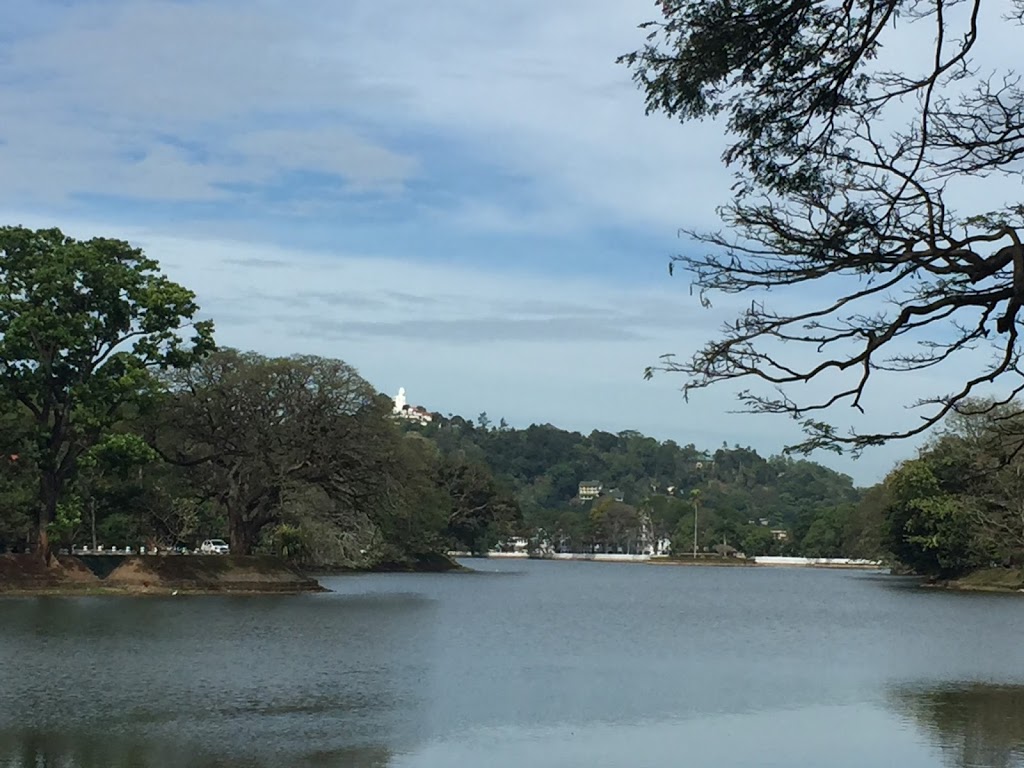 As a lifelong traveler (originally through books!), I find that place is a key element in my writing. I’ve got to feel it.

To research my latest novel, we have come to Kandy, Sri Lanka and are staying at Queen’s, the same hotel in which my characters were billeted during WWII. 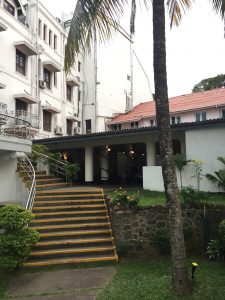 It’s a “heritage hotel,” which here means period charm, but mind the electrical. The open-air Mountbatten Bar is inside the pillars, a cozy spot to ride out the occasional monsoon. 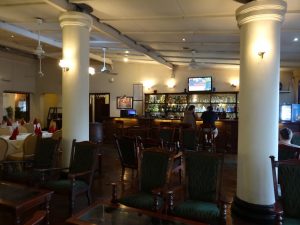 Here is the lobby, all decked out for the holidays. 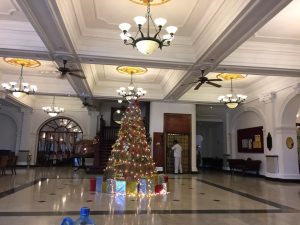 Behind it is the lift. But if you’re in a hurry, take the stairs. 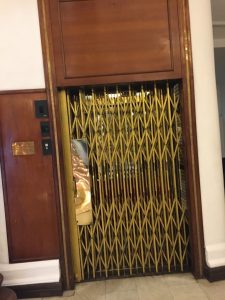 I’m excited to be here, to eat in the same dining room my characters did, to drink in their bar. To sleep in perhaps the same room one of them did and, looking out the window, see what they saw.

I love to explore on foot, so the morning after our Botanic Gardens visit, I take a walk around the lake, the heart of Kandy…still reflecting on the mystery of the King’s Pavilion, the scene of some important action in my book. Or is it? 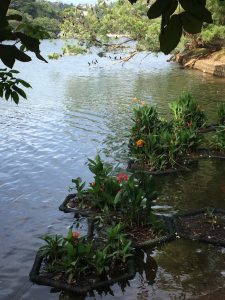 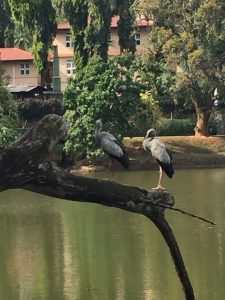 A block from the lake, St. Paul’s Church is on the corner of Temple Square. 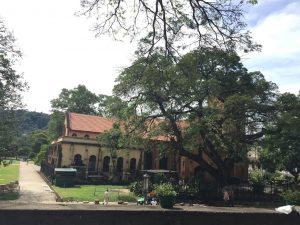 Across the way, Maha Vishnu Devalaya is a shrine to Vishnu, sacred to both Buddhists and Hindus. 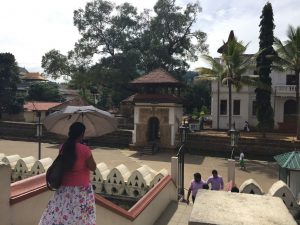 At the rear of the square is the Royal Palace of the Kandyan Kings, which connects with the Temple of the Tooth.

Walking past St. Paul’s, I come upon a great white wall. Yesterday we were told the King’s Pavilion was not in the Botanic Gardens (as I’d read) but near the Temple in town. I suddenly know: this is it! And how logical, here in the center of Kandy’s complex of power, the British built their own official residence–now the Sri Lanka President’s House, our tuk-tuk driver later confirms. (The Bahiravokanda Vihara Buddha sits atop the hill.)

Here is a peek inside the former royal estate.

I know I’ve become rather obsessed by my investigation (which I will continue with the help of botanist Dushy Large after I return home). What fascinates me is it’s a story of how history evolves. What was important then is not important now. Now, a former royal residence sits empty except for ceremonial visits by Sri Lanka’s president. It hides behind a great wall and falls away from history–to the point that many locals know little about it. I think of the forts we’ve seen, the changing regimes–Portuguese to Dutch to British to Sri Lankan.

This story teaches me to approach my research with caution. However well-intentioned the writers of history are, they make errors. Who can possibly know every building, every character of the past. Names change, priorities change–and governments change. My research has led me on a merry chase, and I’ve learned just how elusive “truth” is.

PS Back home, reviewing my photos, I discover the perfect shot for my mental map: Queen’s Hotel (far lakeshore to left); Kandy Temple Complex (across lake on right); St. Paul’s ochre tower (middle). And uphill to its left, a bit of white amid the green: King’s aka President’s Pavilion. Mystery Solved. Now what’s next?


Next: In Search of the Past, Part 4: Kandy Wanderings