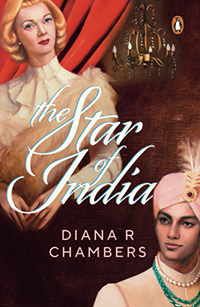 The Star of India

The Star of India is based on lives of Hollywood Star of Tomorrow Nancy Valentine (“the next Lana Turner”) and Cambridge-educated WW2 hero, the Maharaja of Cooch Behar.

Their romance takes her to India during the explosive last days of the British Raj, as this ancient land teeters on the brink of independence—or chaos. She enters a world of palaces, jewels, and tiger hunts, but also one of conspiracy, danger, and attempted murder. As opposition to their marriage grows, Nancy is viewed as a threat by all—especially Bhaiya’s elegant, powerful mother. Then his crown jewel, the fabled Mughal Ruby, disappears…a mystery that will shadow her until the present day.

“A delicious and racy read… Chambers conjures up the glamour, the dazzle, the intrigue, the danger, and the seamier side of the (post-WWII) period.”
—Mandira Nayar, The Week Magazine

When a secret shipment of Stinger missiles disappears in Peshawar, CIA officer Nick Daley becomes entangled in an unusual triangle with a San Francisco journalist and her former Berkeley lover, now an elusive Afghan leader with a price on his head. These characters lead us into a realm of intrigue, betrayal, and murder, where hidden agendas provide their own kind of veil until the truth is revealed in a shocking climax. 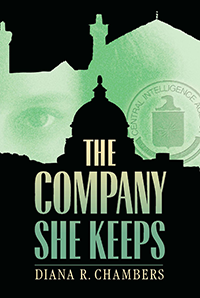 The Company She Keeps

Back in DC, Nick Daley is after a mole at the heart of the US defense establishment, and to get next to him, he enlists the help of the spy’s innocent young lover, Evelyn Walker, nicknamed E. Later, Nick’s boss pressures him to recruit E for other Company operations. After all, it’s a matter of national security, which justifies anything. Or does it?

“This is a fabulous book and a fast read. (It) will pique your interest from beginning to back page. Plots and twists are never-ending.”
—Deb Killarney, CoastViews Magazine