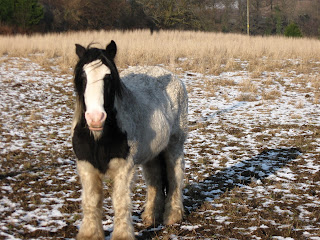 While preparing for seven weeks in Europe, I’ve invited the versatile and talented Carole Buggé (C. E. Lawrence) to entertain you with one of her lively travel stories. Carole has nine published novels, six novellas, and a dozen or so short stories and poems. Many of her works appear in translation. Winner of both the Euphoria Poetry Competition and the Eve of St. Agnes Poetry Award, she is a two time Pushcart Poetry Prize nominee and First Prize winner of the Maxim Mazumdar Playwriting Competition, the Chronogram Literary Fiction Prize, Jerry Jazz Musician Short Fiction Award, and the Jean Paiva Memorial Fiction Award. She was a finalist in the McClaren, MSU, and Henrico Playwriting Competitions, and nominated for a New York Innovative Theatre Award. Her plays and musicals have been widely presented in New York City and internationally.

BOOK BLOG: Lee Campbell “Silent” Thriller Series
Hi Everyone!
The experience of writing this series about serial killers was interesting, because I wrote most of it in a secluded cabin in the woods of Ulster County.  My “security” consisted of a feeble hook and eye lock that a five year old could pry off with a screwdriver.  My Home Protection System was a fat, indolent tabby who was more interested in chasing chipmunks and coming home smelling of skunk than warning me of intruders.
My beloved cabin is part of Byrdcliffe Art Colony in the Catskill Mountains, where I slaved over a hot manuscript for several summers, researching by day and writing by candlelight.  I put in requests to the Woodstock Library for every book they had on serial killers, forensics, and other sordid topics.  The first book was written during the Bush administration, so I’m surprised they didn’t flag my library card – I kept expecting a Lincoln town car to pull into my driveway with two Men in Black wearing Ray Bans and ear pieces.  I imagined being whisked away by the FBI or the NSA to languish in an Egyptian prison, where I would finally give up the names of my “handlers” – Pia and her colleagues at the Woodstock Library, where they don’t charge late fees, because, according to Pia, “We tried it once, but it was too much trouble.” 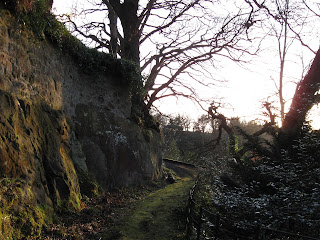 Such is the spirit of Ulster County at its best, and such were my summers, where recreation was playing an old upright piano (formerly owned by The Band), in between death matches of killer ping pong in the barn with fellow writers.  The closest I came one summer to real danger was the hike I took in the Catskills with Byrdcliffe colleague Alexandra Anderson and painter friend Lucy Nurkse.  We entered the woods at about ten in the morning, thinking we’d be out by tea time.  Our Three Hour Tour turned into a Death March that had us staggering out around sunset, covered with mosquito bites and poison ivy, down to our last bottle Evian.  I’m not sure which of us was Ginger and which was Marianne, but I’m pretty sure I was Gilligan.  We’re still not sure why our copious maps led us astray, but I learned something that day:
The woods takes no prisoners.
So I came back to my cabin, settled in with a bottle of ibuprofen and a cup of coffee from Monkey Joe in Kingston, and worked on my manuscript.  I had a first draft by the end of the second summer there, and the rest, as they say, is silence – as in Silent Screams. 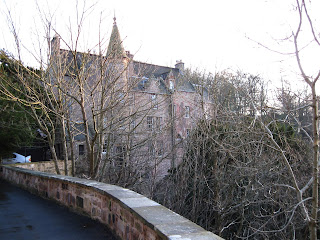 I wrote the sequel at Hawthornden Castle, an international retreat for writers in Scotland where I was a Writing Fellow (I love saying that).  The castle is a medieval structure which provided shelter to William Wallace, Robert the Bruce, and Bonnie Prince Charlie, during their rebellions against the British crown.  I hiked through the glens to Wallace’s Cave, where he allegedly camped while in hiding from the English.  The castle was later owned by poet Lord William Drummond, and now is a retreat for writers owned by the heir to the Heinz corporation.  So every packet of ketchup sold by McDonalds helps support working writers. 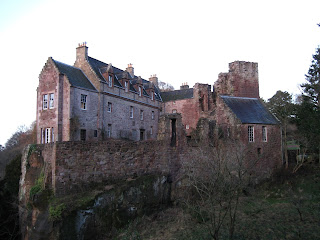 In Scotland, I learned to eat haggis (notice I didn’t say “liked”), took long hot baths in a tub the size of the East River, and was taken very good care of by the wonderful Scottish staff.  They kept tea out for us at all times, which was good, since the Scots apparently don’t believe in central heating – Scotland in January will freeze your tatties off.
Words can hardly do justice to a landscape that, even in January, brought tears to my eyes daily.  The glens are as romantic and craggy as I had hoped they would be, and the Scottish people were as friendly as their landscape was rugged.  My fellow writers included two wonderful British poets and a lovely Russian writer who spoke no English.  We communicated through a computer translator program, which was rather like being on a bad episode of Star Trek.
Ah, Scotland!  Ah, Ulster!  I long to return to you soon . . .
Visit C. E. Lawrence’s website:
http://celawrence.com/
And don’t miss her Rafflecopter drawing!
https://www.rafflecopter.com/rafl/display/6117700412/ 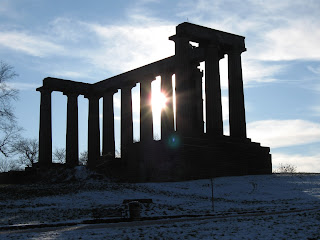