Skip to content
Way back when, an editor read one of my early efforts at international intrigue, and called me a young Helen MacInnes. By young, I now realize he was being kind for I resembled her only in an aspirational way. Over the years, I remained curious, but never got around to her work. 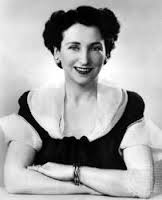 When MWA-NorCal President Susan Spann requested author profiles for the newsletter, I decided this was the perfect kick in the butt to investigate MacInnes, dubbed by the New York Times, “the queen of international espionage fiction.” Her work spanned a tumultuous chunk of the twentieth century from WW2 through the Cold War, creating suspense novels set against the major political events of her day.
A formidable woman, she was born in 1907 and as a translator, she and her Oxford professor husband, Gilbert Highet, traveled widely in Europe in the early thirties, viewing firsthand the rise of Nazism. At some point in those years he joined MI6, and served as a intelligence agent. The couple moved to New York in 1937 where he was part of a joint MI5, MI6, and SIS operation based in Rockefeller Center, to enlist America’s support in the war.
MacInnes used her proximity to the clandestine world to create an insider’s view of how it is. A great traveler and brilliant researcher, she had a sharp eye for the telling detail. Her ability to paint a scene and use setting to convey emotion is peerless. 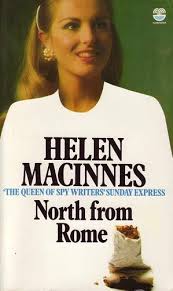 The playwright in North from Rome is hiding outside a Tuscan villa, preparing to rescue his lover from a conspiracy of Communist-linked smugglers. “Around him, the cicadas had become a permanent background of sound, no longer heard. The violence of brilliant light and black shadow, the contrast of scarlet flowers against blue sky, the heavy scent of sun-warmed fruit, the jagged rhythm of the yellow butterflies were no longer seen or felt. Nothing existed, nothing, except the silent house and the moving hand of his watch. Nine minutes now…”
Her characters are often ordinary people who become entangled in larger geopolitical forces. In another Cold War novel, Ride a Pale Horse, a journalist at a Prague peace conference ends up carrying top-secret documents from a potential defector to Washington. However, she soon learns there is a mole in the CIA. 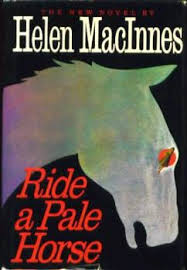 Over her career, MacInnes wrote twenty-one espionage novels, of which four became movies. In one of them, Assignment in Brittany, a British man impersonates a French resistance fighter hospitalized in England in order to collect intelligence in a German-occupied Breton village. Just as the author was losing me that even the man’s mother is fooled, Madame confronts the hero in a sly twist—he is generous and brave, her son is not! 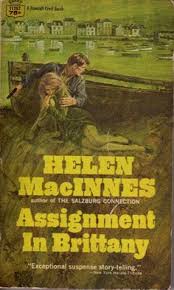 MacInnes has her flaws. Her work often feels overwritten with much annoying head-hopping, but her descriptions of the landscape are gorgeous and she uses the terrain to great effect in well-developed action scenes. Transporting a wireless transmitter,  the British hero and his young guide pass through a hidden passage in the ramparts of Mont St. Michel…“And then the narrow slab of rock moved slowly aside. The cool clean breeze from the sea ended the feeling of suffocation. In front of them was a panel of night sky, and the gentle movement of small trees swaying like black-shawled women at a funeral.” They are outside the great wall and will soon reach the north shore of the island. But the tide is rising and Nazis are everywhere.
The world is a dangerous place and Helen MacInnes takes full advantage of it.