Skip to content
Paris and I go way back, but this was the first time I will arrive by train. 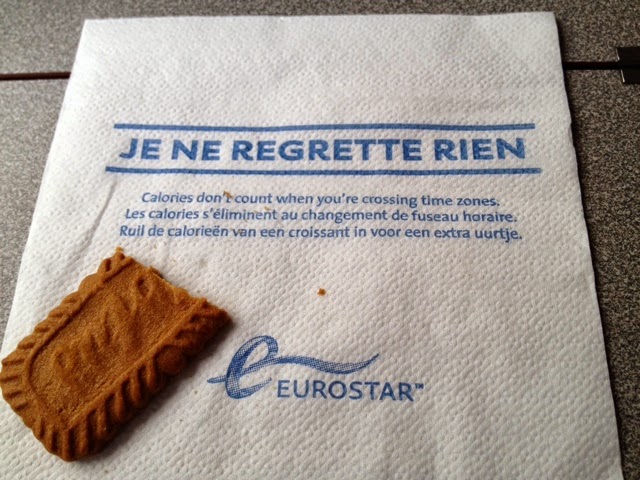 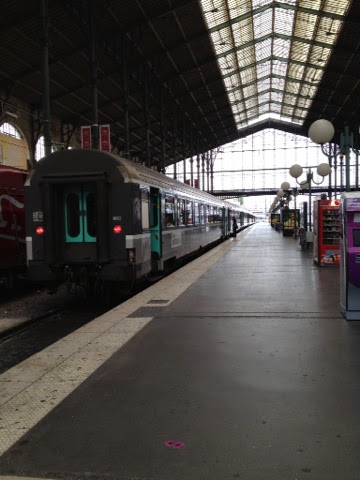 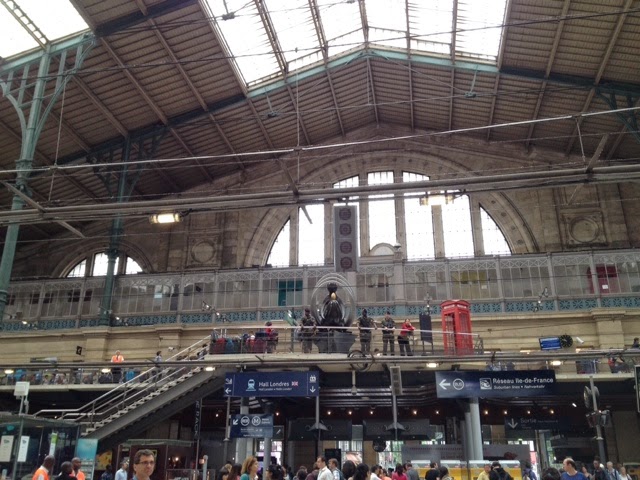 Paris has changed, as we all have, yet as they say, plus ça change…
Once itself a train station, the Musée d’Orsay is still the most beautiful museum space in the world. 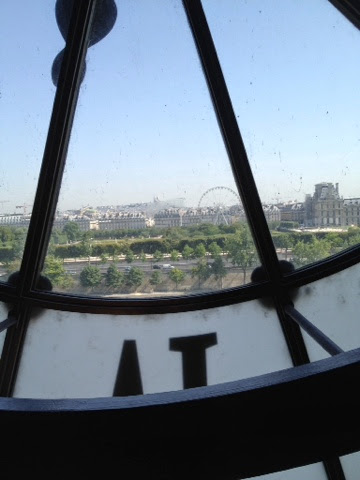 And I still lose myself in The Starry Night, my soul spinning into the heavens. Thank you, Vincent. 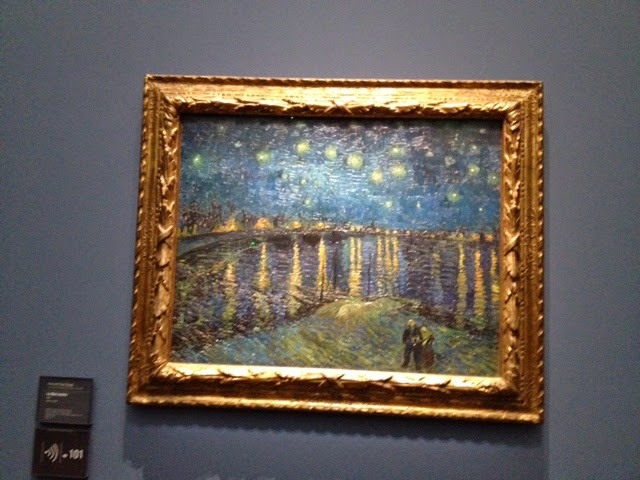 I reflect on the Dr. Who episode in which Vincent is transported to our day and sees just how much he is beloved. Still dizzy, I regard another timeless view. 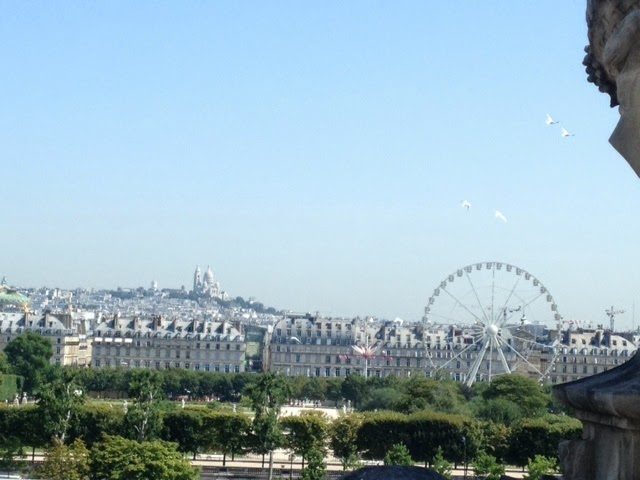 So shoot me. I don’t come to Paris for the food, other than croissants, of course. But the falafel is as good as ever. 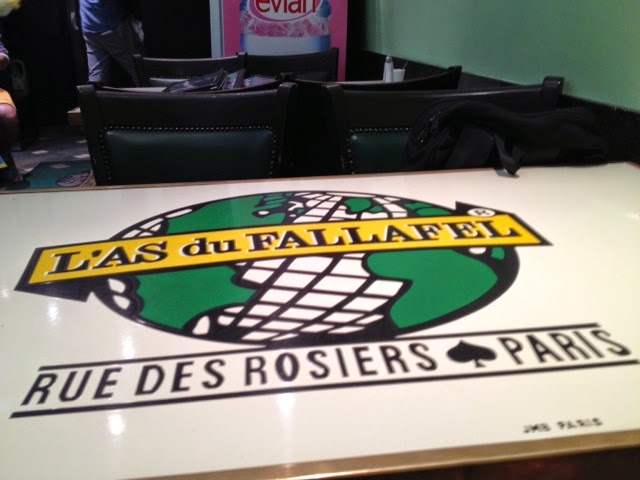 I come for the street life, the people, the clothes, the art. 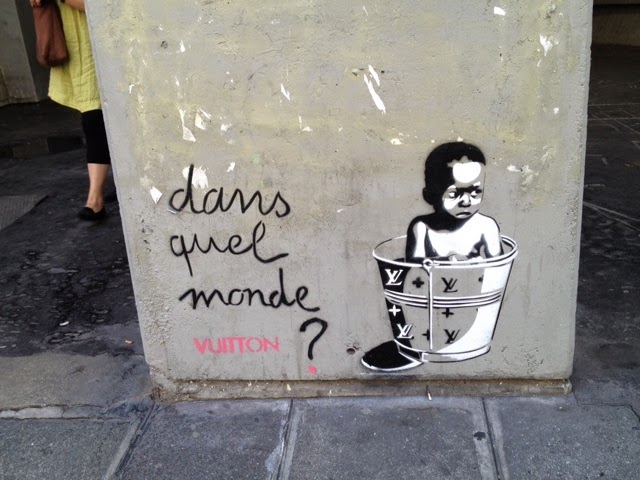 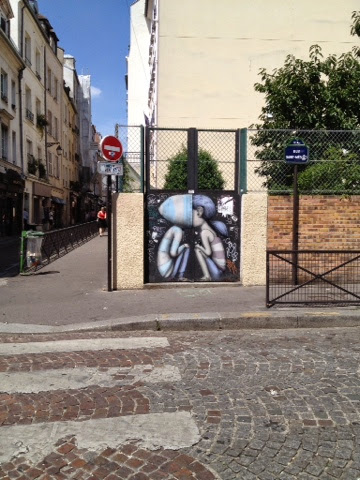 And the music, this late night in the Marais. But tell me, is the piano a percussion or stringed instrument? 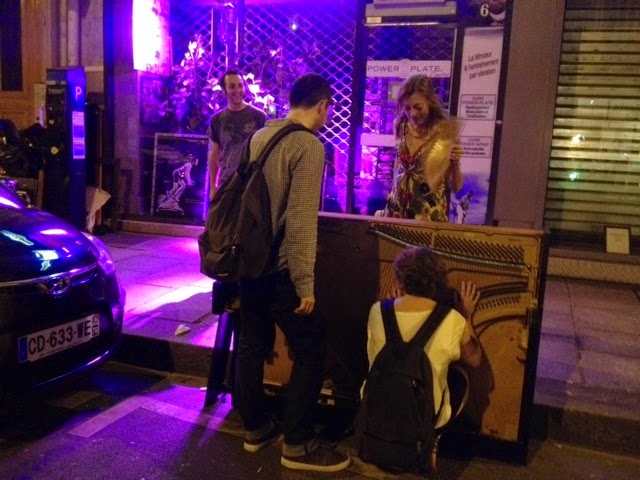 I love the gardens of Paris. For all the thousands of times I have walked through the Jardin du Luxembourg, I always end up in this secluded corner, while always wondering why I am so drawn to such a violent piece. Is it an accident that I have it in mind for a murder scene in a future book? 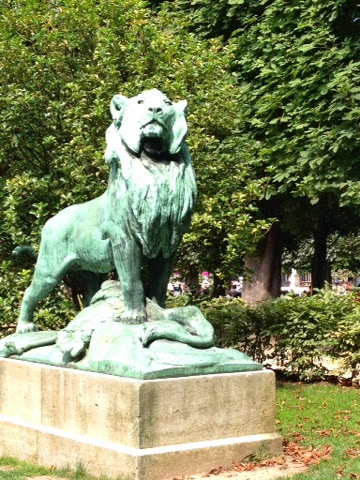 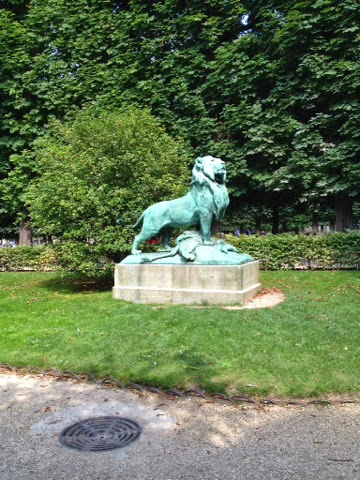 I always pause to fantasize about this penthouse across from the park. In another life. 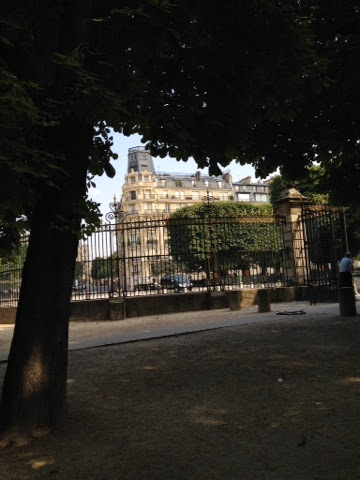 I often enter or leave through this gate, which takes me back somehow to the times of Piaf. 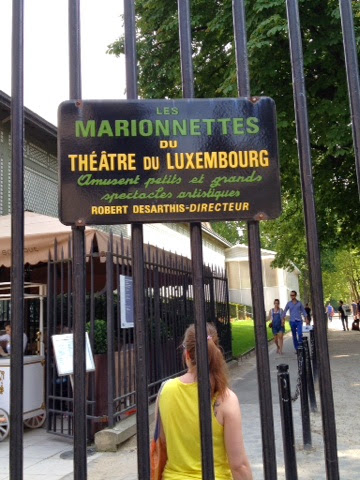 Piaf lived in our quartier, the 10th, still ungentrified with its international population of every color and wardrobe. Her lover boxed in the local gym; she wrote songs at Chez Jeanette. Napoleon’s stables were here, just outside the old city’s gate. 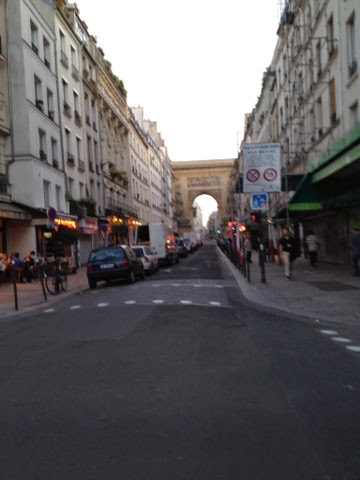 We learn this history from our genial host, Christophe de Oliveira, owner of several Paris rentals, including our 17C apartment, Atelier 34, complete with underground passage! 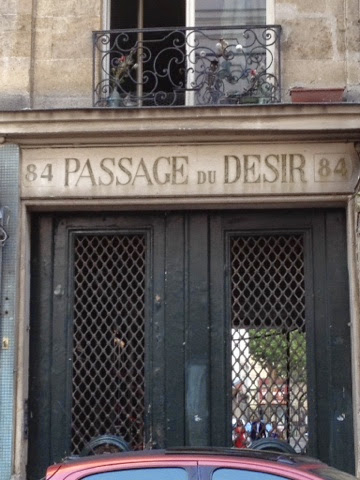 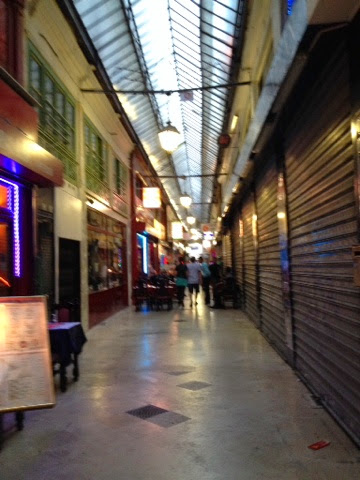 This time, for something new, we visit the city’s Grand Mosque. 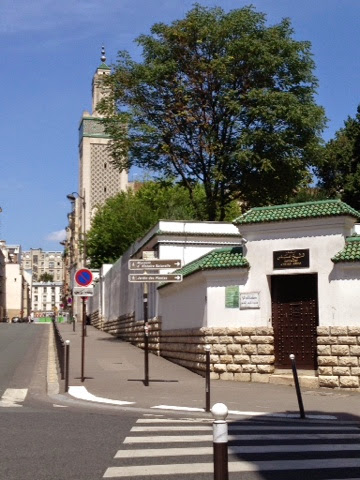 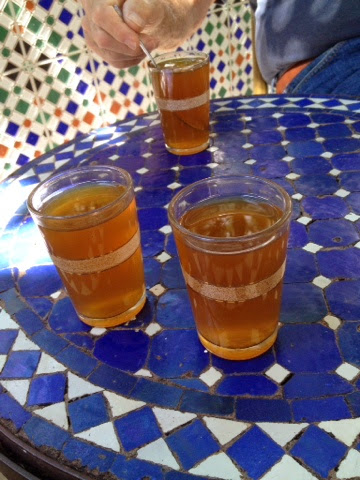 But then we return to our familiar haunts. 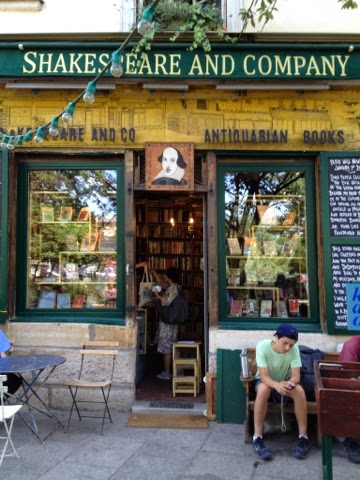 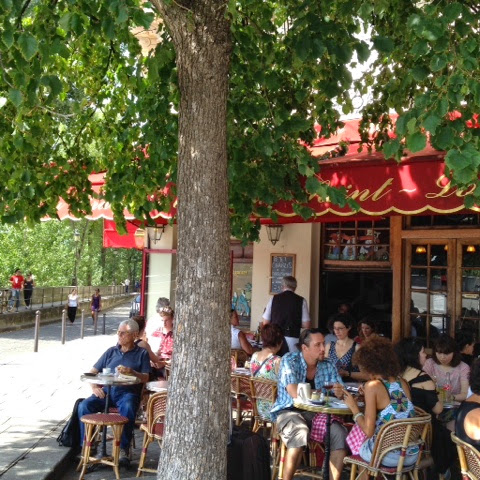 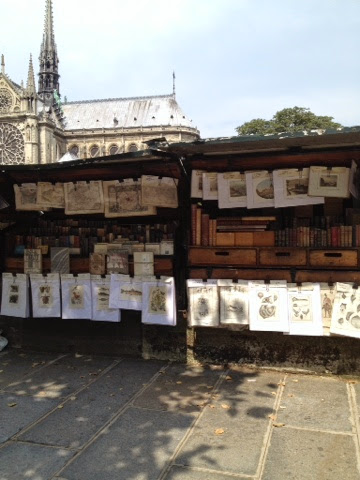 Nearby, we discover a sobering monument to the children of the 5th Arrondissement who were deported to Auschwitz before being old enough to enter school. 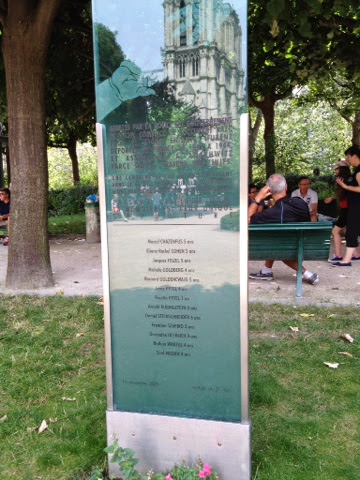 On my daughter’s urging, we (re)visit the Pompidou Modern Art Museum – and not for its rooftop vista. In contrast with its boisterous exterior, the interior is calm and elegant, offering its own panoramic view of the twentieth century. I liked this Man Ray. 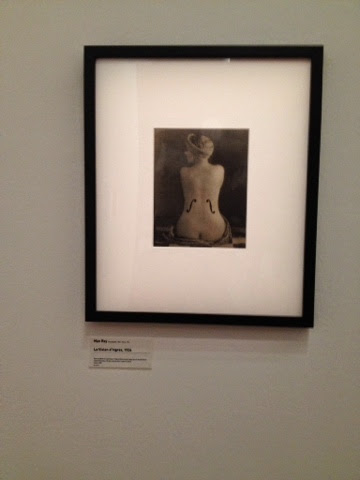 We exit onto the cobblestones of the old market center of Paris. We read the plaque honoring a hero of the resistance, fallen…right there.
That is the thing about this city, you are inside history. Blood has flowed in these lanes, people have been born, dreamed, and died here. Many of the greats of the western world have walked these same streets.
Under this light. The glorious, fabled Paris light that enchants us all.
And who is not drawn to her mysterious, peek-a-boo courtyards? During this hot summer, ours is calm and cool. The stuff of poetry. 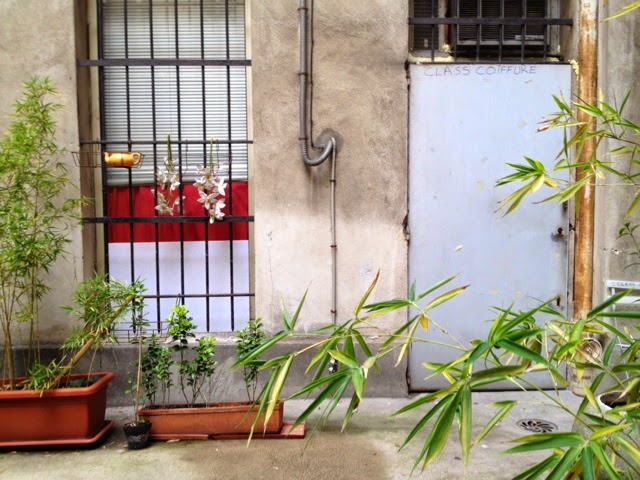 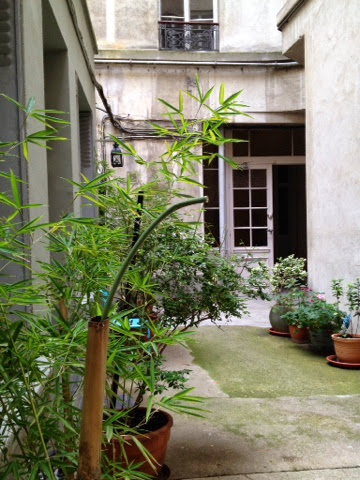 Soon it is time to say au revoir. Until we meet again.
Now it’s back to the Gare du Nord. We’re taking the high-speed Thalys train to Amsterdam, http://dianarchambers.blogspot.com/2014/07/europe-by-train-4-amsterdam-going-our.html. 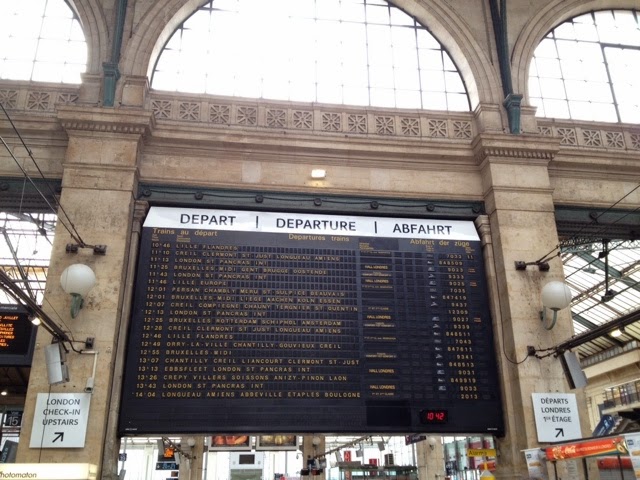 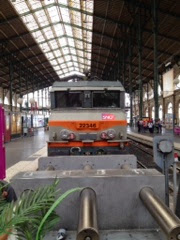